Set up Event Store on AWS with CDK in TS

Event store can be deployed as a managed instance via Event Store Cloud which will take care of availability, clustering and other candies. The only drawback is the high cost of the hosting resources plus a separate cost (also high IMO 😛) for support. Here we won’t take any fancy shortcuts with managed clouds and do it on our own in AWS using infrastructure as code with CDK in Typescript. We will have one event store cluster running in ECS Fargate service accessing an external file system, or EFS.

The CDK code is available on github.

Our CDK code will:

A couple of very important CDK best practices that we will follow in our setup:

Following these will greatly help when your app grows - you will need to refactor or add more resources. For the above setup we will have:

EFS is a stateful resource and it depends on VPC (removing it will nuke the EFS), so it makes sense to group these two resources in one stack. The rest - ECS cluster and event store service - belong to a separate stack that can be destroyed and re-deployed without any data loss.

Here is how the vpc and file system look, one thing to note is enableAutomaticBackups when creating the file system:

You can configure backups manually or turn on automatic backups (enableAutomaticBackups is set to true). However you need to be aware of the default setting of automatic backups. According to the docs:

The default backup window (the time frame when the backup will run) is set to start at 5 AM UTC (Coordinated Universal Time) and lasts 8 hours.

And to ensure consistent backups AWS recommends pausing any writes to the file system or unmounting it during the backup.

If you don’t want to keep these default settings, you shouldn’t enable automatic backups and instead configure your own backup vault and backup rules, e.g. here is a backup rule to run at 2AM UTC within 2 hours:

Now the stateful resources and their dependencies (VPC and file system) are packaged into a deployment unit StatefulStack. From this stack we expose the VPC and file system as two publicly accessible properties so that our event store construct can use them later when constructing the app:

This beast is tricky, here is what we do:

Here is the full code for the event store construct. It needs access to the file system and the VPC and we can pass them as props when creating an instance of the construct.

Let’s assume we have created a cluster and a Fargate task definition:

Next we create volumes and attach them to the task definition:

When creating an event store we are pulling an eventstore image from docker hub, specifying two external ports for TCP (1113) and HTTP (2113) communication:

EventStore image supports built-in self-signed or real certificate, see event store security. Setting EVENTSTORE_INSECURE to true will allow us to skip this for now, we will deal with it later.

And now we can mount the volumes we created earlier:

Last, we create a Fargate service on the cluster and with the task definition defined above.

Assume we have another Fargate service and we want to give it access to our event store. We need to add inbound rules in the event store security group to allow access on specific ports from the security group of this new service.

Changes we want to make inside the event store construct:

And our service construct:

Our bin/app.ts can now include the new service and accept event store connections as dependency.

Scientific diagram of how everything hangs together

Here is a highly scientific graph of the AWS resources and connections between them: 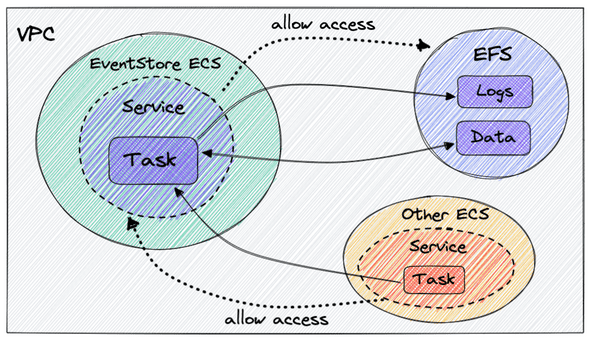 You can enable access to EventStore Admin UI for testing purposes by exposing port 2113 to your IP in the inbound rules of the security group that belongs to the Fargate service we created above. This is not pretty, but hej, we are having fun here … You should be able to access the Admin UI at http://<FARGATE_TASK_IP>:2113.

I guess it goes without saying that you should remove your IP from the rules and set up a more robust solution (external DNS, service discovery via AWS Cloud Map etc) when going live.

This task is not for the faint-hearted, the complete code can be looked at/copied entirely at your discretion here.

The certificate won’t be stored in the file system but in the Fargate task storage and will be re-generated every time the task is updated. Here are the steps:

The communication to/from the event store is now encrypted with a self-signed certificate. A more production-ready setup would be nice, but hej, it is just an experiment for now.

Things to do before going live:

I had the chance to carry out this cool experiment while working at a wonderful place, called Insurello in Stockholm, Sweden, with the help of my brilliant colleagues. They do tons of functional programming with F# and Elm, event sourcing, AWS with CDK and much more (I am not employed there right now and I miss them).